Swept Away: Survivors of the Massive Avalanches 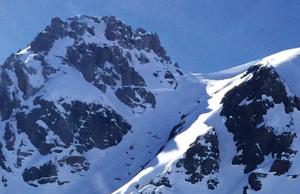 This file photo shows the region of Yellow Mountain where an avalanche swept away a skier Wednesday. Fatwa is the chute that diagonals from upper right to lower left. [Photo courtesy of San Miguel Sheriff’s Office]

Two brothers survived a massive avalanche — and then a second slide — on a popular backcountry ski route Wednesday, despite the fact they both thought the other was dead.

Alex and Brian Holmes, both of Ophir, were skiing from Trout Lake to Ophir via the Fatwa route down Yellow Mountain. When Brian, 26, commenced his descent, he triggered an avalanche, according to a news release from the San Miguel County Sheriff’s Office.

From above, Alex, 27, watched the “massive slide” sweep his brother out of sight. When he tried to ski down to search, he triggered a second slide himself. Alarmed at the dangerous conditions, Alex abandoned his search and retreated toward Trout Lake to call for help, police said.

He later told rescuers he attempted to both ski away from and swim out of the slide, but failed. Instead, he tomahawked helplessly down the 30-degree slope, finally coming to rest on his back, 1,000 feet down the slope.

Though mostly buried in snow, Brian’s face and one arm were exposed. He spent about 15 minutes digging himself out of avalanche debris, then commenced a fruitless beacon search for his brother, who he also thought was dead.

During this time, dispatchers reported receiving 911 calls from a cell phone belonging to Brian Holmes, but never any verbal communication — only the sound of breathing.

After nearly an hour of searching and attempts to call 911, Brian located the gear stripped by the slide (one ski and both poles) and made his way down to Ophir.

There, he met Rector, who called off the avalanche dog and the helicopter, whose pilot was moments away from taking off for the accident scene.

Brian Holmes, who had not been wearing a helmet, was taken to Telluride Medical Center for further assessment, treated for non-life-threatening injuries, and released, deputies said.

Winds from the south and southwest are known to load Fatwa with unsafe amounts of snow, and such winds howled to 30 mph after last week’s storm. Rector described the slide as “formidable.” Alex Holmes reported the crown was 2.5- to 4-feet deep, and that the slide spread across Fatwa and ran from the rollover at the top all the way to where the chute opens onto an apron. Said Rector, “Given the circumstances and nature of the slide, this skier is extremely fortunate.”

The Colorado Avalanche Information Center reported Friday that snowfall and strong winds were forecasted to continue through Friday and overnight. These weather conditions make it easier to trigger a persistent slab avalanche. It predicted the danger above tree line to rise from moderate to considerable.

Authorities, meanwhile, dealt with an avalanche of attention from the accident. The nature of it — brothers who both survived, though both suspected the other was dead, the day before Thanksgiving — piqued media interest not just locally, but nationally.

Reserve Public Information Officer Susan Lilly spent most of Thanksgiving explaining what happened and telling outlets as far-flung as “Good Morning America” that she couldn’t speak for the brothers and that they had zero interest in talking to the press.

“Both feared the other had died.”